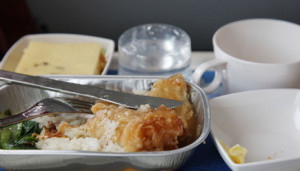 Two key points to consider when choosing your International airline include comfort and food.

My first trip to Paris from J.F.K. airport was on a 757-200 British Airways (BA) Airbus.  The seats in Economy Plus (better known as World Traveler Plus) seemed comfortable with plenty of leg room compared to a coach flight. A clean linen towel was placed over the headrest and we were given blankets wrapped in cellophane, giving the allusion of cleanliness, to keep us warm during the 7 ½ hour flight to Paris.

We grabbed a late lunch in New York before boarding our 9:30 PM flight, but the packing, taxi ride to the airport, plus checking in and walking to the gate worked up our appetites.

My companion chose the beef with mushroom sauce. His description of the meal was, “It looks and tastes like rubber.” I chose the pasta with cheese sauce served with zucchini bits, a stale inedible roll, a wilted salad, and a slice of lemon cake that tasted like grains of sand. Apparently this is a new recipe for spaghetti; the cheese sauce consisted of bleu cheese salad dressing. I ate about five bites of the noodles and even tried the zucchini that tasted sour before deciding to hold off on eating until I reached Paris. After an urgent trip to the bathroom, I felt better.  I’m not sure how BA can get away with their disgusting food offerings. Perhaps they need to find a new caterer.

My seat on the 757 had a 47 inch pitch with a 20 inch width, which allowed me to relax and sleep comfortably for a couple of hours during the flight. Luckily once I arrived in Paris, both the quality of food and the excitement of the city itself seemed to compensate for my lack of sleep, nutrition, and calories.

On the plane from Paris to London, I cornered a flight attendant and asked her where to eat at Heathrow airport. We were given the name of a Japanese restaurant, Wagamama, and we both consumed a huge lunch before departing London for Phoenix. I wasn’t taking any chances this time.

Our plane back to Phoenix, a 747-400, was a larger, older model. While walking to my designated seat, I stepped on and crushed two plastic cups that were in the middle of the aisle. I guess the flight attendants forgot to clean up before we boarded. The seats measured out smaller, a 38 degree pitch with an 18 ½ width. Not much leg room or an ability to be comfortable during the long flight home to Phoenix. On the upside, our seats were limited to two instead of the four crowded seats located in the center of the plane. Dingy doilies, the size of a handkerchief were on each headrest along with a dirty ragged blanket and pillow. To make matters worse, my window shade was stuck shut. The seatback T.V. screens were small in comparison to the individual iPads offered on our flight to Paris. This plane’s interior was noticeably shabby and in serious need of repair.

On our flight back, the lunch menu consisted of one appetizer—a bland and unsavory potato salad. The main courses, a seared fillet of British beef or roasted corn-fed chicken was difficult to look at, let alone eat. The only portion I ate consisted of a mashed sweet potato which held me over for the duration (10 ½ hours). My companion pushed his tray aside after two bites.

I talked with a flight attendant about their quality of food and why they were still flying the antique 747 plane. She assured me that they were about to retire this model and buy some new ones, however she had no answer concerning BA’s quality of food. I think if more travelers voiced their opinions to the airlines, they would have to change their ways. (Send your email to CEO: keith.x.williams@ba.com). After all, we pay high prices for International airline tickets and in turn we should be cared for, which includes our comfort, a healthy environment, and nutritious food.

Before we booked our tickets, several people said, “British Airways are the best. You must fly with them.” I hate to think of what their competitors offer, or maybe they used to set precedence and need to live up to their current seared reputation.

FYI: I do have one complement about the old 747’s: the restrooms are still small with the usual odors, but seem to have more leg room than most other planes. How sad is that?