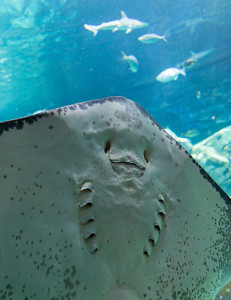 After discussing where to eat for thirty minutes, we settled on Stingray, a Japanese restaurant at the Biltmore. On previous visits, I’d sit at the bar during happy hour and devour the eel rolls with a Sunomono, translated to “cucumber salad.” Not to be confused with Sudoku, a number puzzle,  or pseudomona, a deadly bacteria.

My last two visits to Stingray were flirtingly spent with single buff guys sitting at the bar enjoying drinks. In fact, my girlfriend and I had to snipe a couple of barstools because the place was packed. An aquarium behind the bar features colorful tropical fish for additional eye candy.

We decided to eat at a booth in the lounge rather than the open misted patio because even though it was 8:0

Oh, by the way, this is the first ‘happy face’ ever to surface on my computer. So, I’ll keep it there.

Two drunken young ladies sitting at the bar were sufficient entertainment for us during our dinner. I doubt the management had a reasonable drink cut off for the establishment, because their drinks kept coming.

My consort did the ordering. We started the night with Tuna Tataki, a half-seared tuna with a ponzu sauce (soy, lemon and onion vinaigrette).  I took one taste of the dish and pushed it away like a spoiled child because raw tuna does not happen to be a favorite of mine. However, my friend, a sushi connoisseur, cleared the plate in four bites. Using my chopstick chops, I dipped the ginger in the soy and wasabi sauce which disappears within seconds

Lobster ceviche, marinated with bell pepper, red onions, jalapenos, mango, radish sprouts, and yuzu (citrus) scooped onto butter lettuce leaves tickled my palette and left me panting for more. The next surprise came with an assortment of fresh sashimi, pronounced like the Flaming Lips’ song, Yoshimi, yellow tail, salmon, tuna, shrimp, and a dollop of crab salad on the side arranged over sushi rice. I’ll admit to eating a few chops of crab with rice, but again my companion ate the majority of the fish.

By this time, he realized that perhaps he was ordering more for himself than for me, so he motioned to the waiter and ordered the lobster dynamite, which he remembered we enjoyed on a previous visit over a year ago. To clarify, that is when we were dating, lovers—a time when we couldn’t take our hands off each other. I would have eaten a dead skunk if it was served in Japanese fashion with enough sake. I would have swallowed the rawest fish on the menu; I would have faked a foodgasm.

I picked at the top of the lobster with my shrimp fork, tasting a fiery aioli sauce mixed with oyster mushrooms and onions. A bit rich for my taste, but this time I decided to be a good girl, a good sport, and act as if I loved it.

We topped the night off with an eel roll. It was obvious to me at that point that my consort was trying to mollify my anger and my unsatisfied hunger with one of my favorite rolls; however this dish was just plain boring to both of us. It lacked the usual gooey sweetness of eel sauce.  I glanced over and noticed my companion with his glasses over his nose, studying the menu, hoping to find a quick last minute dish to satisfy his now ravenous friend. I turned to him and said, “I’m full. Let’s get out of here.” Needless to say, the bill swelled to triple digits, like the heat outside because of my friend’s difficulty finding fabulous flavorful fare.

Thinking back to that evening, we should have ordered sake.