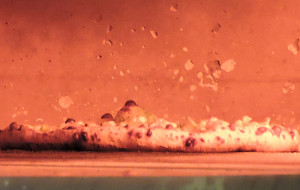 It’s probably not fair to review a restaurant during its soft opening any more than you would think to review your first time . . . It’s an overture before the first act begins—a trial and error period needed to refine product and presentation.

My consort and I began started baking homemade pizzas two years ago after being disappointed with the Valley’s pizza scene. Our creations began with a naked crust rolled out and pinched around the perimeter of the pan. We started experimenting with different types of dough, which included a packaged organic, chemical free sausage, and healthy vegie toppings from Whole Foods. While there’s something to say about home baked pie—every once in a while we crave a wood fired slice of za.

FORGE, a product of Le Bon Temps Restaurants, opened on October 9 in the Union shops at the Biltmore Fashion Park. This isn’t just another pizza place touting a wood-fired oven—their oak and almond fuel produces a crust that’s sweet and smoky on the palette.

We’ve tried at least a dozen pizzerias; watching Pizzahacks rolling out or tossing the dough as if they were performing an art. Whipping it up in the air or kneading it with their fingers. This act won’t be appearing at Forge. They simply form the dough and whisk it onto their pizza peel and into their steel-clad Valoriani pizza oven.

The design, a demonstration kitchen, makes guests feel included in the pizza making process. Depending on where they are sitting, bar, patio, indoor dining, they can watch each pie cook. Their minimalist design, an industrial space with simple tables, metal stools, dangly lights on the patio, soaring ceilings, and open duct work gave it a casual feel. 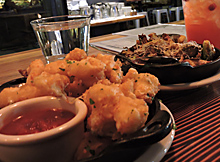 Our server, Chloe, a knowledgeable transplant from Colorado and former culinary student, assisted us with her knowledge of cocktails, starters and entrees. We kick-started our evening with IF YOU SEE KAY, an Italian red blend, and a mixology of aperol, Lillet, hard cider, and cranberry compote. For openers, we ordered crispy cheese curds with a tomato dip, long-cooked ribs on the bone with a honey jalapeno slaw, and crispy Brussel sprouts served with fresh parm and pepper flakes. Thumbs up for the Brussel sprouts, roasted to perfection, cheese curds not for fry-finicky diners, ribs mediocre, rub right-on, and a crunchy tasty slaw.

At its coming-out party, executive chef Jeffrey Amber and his team unveiled their Bay area import—a Neapolitan style pizza made with a vegan crust (natural yeast), simple ingredients and creatively topped. We ordered the white cauliflower pizza, leeks, gruyere, arugula, and sauced with a pistachio pesto and crunchy bits of nuts. Grated cheese is strewn with abandon and tomato sauce stingily applied. A second pie, a mushroom with house-made sausage, onion, garlic and thyme dressed with a fresh tomato sauce had a salty crust. The pizza is lumpy and a little heavy-handed on the muzz. The spicy sausage, sparingly scattered with a deft hand, gave off just the right amount of heat for our Arizona palettes and we kept scavenging for more.

Our taste buds rejected the abundance of sodium, perhaps in the dough, not sure of the origin and the grease under the pan and on our fingertips caused us to request several napkins. But the pizza’s seasonal ingredients packed in flavor which satiated our hungry appetites.

A meal isn’t complete without a choice of sweets. My consort ordered the soft-serve salty caramel cream for dessert. I spooned the tip of the swirl and tasted pure salt—not my style. I should have ordered a root beer float.

The verdict is in: soft crust, soft ice cream, soft opening. Oh well, next time, and there will be a next time soon.