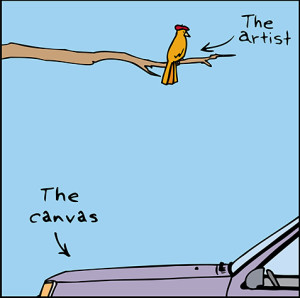 Our night began with a stroke of luck, or so we thought. My consort found a parking spot 10-feet from Zinc’s front door. We usually have to park a block or two away, so we started the evening with a smile.

Three couples met for dinner, my two cousins and their spouses, and toasted a mini reunion with a bottle of French wine. Our favorite appetizer, large mussels served in a rich succulent sauce, lived up to their reputation while the rest of the meal disappointed our taste buds. The fish fell flat and the steak overcooked. We were served four slices of bread and two pats of butter to share among six hungry adults and had to request more. Service seemed slow for a Sunday night and we wondered we had to seek our waitress out several times.

This is not a restaurant for anyone on a budget. It’s a bistro, although not very French, except for the Eifel Tower decorated with cheesy Christmas lights in the middle of the room. I almost forgot—our server did say, “Au revoir” after she handed us the check for over $300.00. Yes, you math is correct. It’s was an overly expensive meal for what we ordered—a shared appetizer and main course.

We said our goodbyes at the door and hugged as crazy cousins do. They asked where we parked and we pointed to our car right outside the front door. “Oh, you are lucky,” they commented. “We parked down the street.” As we approached our car, my consort said, “My car is covered with guano (bird excrement).” 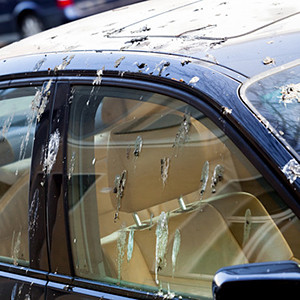 And that’s when the trouble began. My description of our vehicle is the following: We weren’t able to see out the windows except in between splatters of bird waste. We had to refocus our eyes and twist our heads to see through the carnage.

Our collateral damage, which was noted as soon as we pulled into our lit garage, was a work of art worthy of Jackson Pollack. The colors were magnificent, brown and white splotches on new car silver. It was museum quality.

The morning after, like so many we know, proved to be a nightmare. My consort drove to the nearest carwash where workers pointed and howled at his misfortune. Everyone wanted to know where his car had been and of course he told them, Zinc Bistro at Kierland Commons. We added a warning, “Beware of the bird droppings if you park nearby.”

We called Bistro’s manager in charge that morning and told him what happened. He was no stranger to the problem—he had heard this tale many times before. In fact, we found out that Zinc Bistro has known about the Guano problem for the past ten years—since they opened. After talking with two inexperienced and unsympathetic managers, we tried to reach the owner, Terry Ellisor, who we were told, doesn’t think the guano problem is in his jurisdiction. Neither he nor the managers feel their patrons should be warned when parking in front of this eatery. And I quote, “We spare our customers the discussion of dangers of bird excrement before they dine with us.” That’s where my consort and I have a problem. So, rather than just ignore what occurred, we want to alert the public to the gangs of vandalous birds nesting on the trees directly in front of Zinc Bistro. You’ll save yourself aggravation and the cost of a VIP wash complete with detailing and don’t expect any sympathy from the BISTRO.

FYI: You can bet management doesn’t park their cars anywhere near the restaurant.