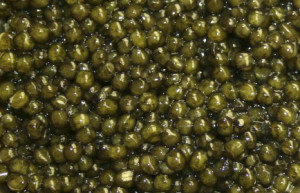 I think the role of a chef, is not just to cook, but to create cravings.” – Jean-Georges Vongerichten

Famous rock-star chef Jean-Georges causes foodies to swoon just hearing his first name. With his three-star Michelin achievement comes a strong-willed Alsatian background with culinary history running through his veins. It wasn’t a difficult decision to end our gustatory Valentine’s Day weekend with a dinner at Prime, located in the Bellagio Hotel, which in ‘Vegas’ means a long walk through a smoky casino. You sink to a new low trudging in four-inch heels with your man to Prime steakhouse. You don’t have to lower your standards, but you do have to descend physically down long corridors to the lower level of the hotel. The hike is well worth the effort as it allows you to dine while gazing out multi-paned French windows at the legendary and talented dancing fountains in Bellagio lake that perform every fifteen minutes or so they say. More about that later.

Prime’s chichi eatery shows some of the refinement of an Eastern chophouse – dark, warm colors, comfy chairs and crisp white tablecloths. But it is also true to its Vegas-baby location, displaying just the right amount of glitz, bling and smarmy opulence which the owners designate as chocolate brown and “delicate Tiffany blue décor” the elaborate design of Michael DeSantis. Chef Jean-Georges has two establishments in Las Vegas, the other is his self-named steakhouse at the Aria, plus over two dozen additional upscale restaurants scattered throughout the world. 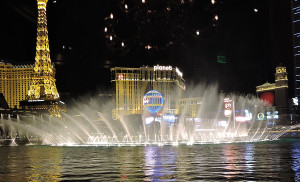 Once seated at our “ring-side” table we were greeted with a complimentary champagne cocktail and a timely explosion from the star of the show, which interrupted our intimate moments more than once. We timed the intervals and they were irregular between 5 and 6 eruptions an hour. To be honest, after a couple of acts, I was more taken by a family of ducks cruising around the lake seemingly unaware of the carnage going on around them.

We sipped our champagne, toasting one another in between kisses before we picked up the comprehensive steakhouse menu loaded with starters, soups, salads, steak, seafood, sauces and sides, and began to ask our server questions. Our Captain had been with Prime since the day Bellagio opened in 1998, so his knowledge was immense and he would toss in a bit of trivia or add an aside of history with every answer and explanation. We looked at each other, and agreed by telepathy that this was our guy. So, we gave him free rein to order for us. We were not disappointed.

For a first course, he brought us a classic presentation of luxurious, ostentatious and pretentious golden Osetra caviar. It was to die for. Chilling in a large bowl of meticulously hand-cracked ice lay a tiny cup of silky grey-gold gems destined to be scooped onto silver-dollar buckwheat blinis with a mother of pearl spoon. The accompaniments made the deliciousness stretch to last as long as possible— minced red onion, chopped hard-cooked egg yolks and whites, creme fraiche, lemon, capers and chives. Oh my! I guarantee that after a few minutes of caviar—feeding-frenzy there was not a single sumptuous ovum left in sight.

After basking in the afterglow, over a cleared and meticulously crumb scraped table, the salad was delivered. For this, our server had recommended the roasted beets with apple, ricotta and quinoa. It was perky and tasty, but certainly not as amazing as course one, so we concentrated on the wine. We had ordered The Prisoner, a personal favorite since Consort once won a bottle at a pizza cooking party (but that is a whole ‘nother story), a trendy red blend of Zinfandel, Cabernet Sauvignon, Syrah, Petite Sirah, and Charbono.

The main course came with a flourish, three varieties of A5 Japanese Wagyu beef, filet, strip and ribeye, to be carved tableside and presented with simple vegetables and bearnaise, peppercorn and rice wine sauces. Some people call this Kobe beef, because of its relation to the city of Kobe, Japan. Prime more accurately labels it as Wagyu, or Japanese Black Beef, and the A5 designation translates as “best of the best.” However, as it is with most “done three ways” offerings, one way is always better than the other two. In this case it was the filet – the ribeye and the strip both seemed to need an extra minute on the fire. Our server had recommended a pair of sides for the main course, Brussels sprouts with maple-roasted quince and hunks of bacon, gnocchi and mushrooms in a gouda fondue. Both were good, but a bit too heavy handed after all the previous viands. 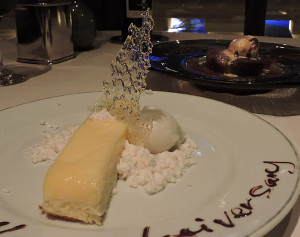 Our Captain, along with server and busser teamed up and would not allow us to leave without one complimentary anniversary dessert, so they brought two – an amazing cheesecake with pineapple snow and a chocolate bombe that melted under a pour of warm caramel sauce to reveal a prize inside. They were ambrosial, but the gesture was all too Vegas – a redundancy of lavish excess. We capped off the night with a Canadian classic, a rich, sweet and indulgent flavorful icewine. We toasted each other, and tasted the syrupy wine on each other’s lips. One more toast to the team, Captain Danny, Server Julio, and Busser, Miguel.

FYI: The Bellagio Lake, the size of eight football fields, holds the same amount of water as 2,000 swimming pools and would take more than a year to fill with a garden hose.