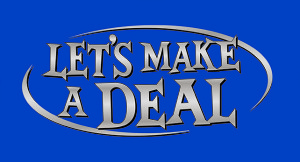 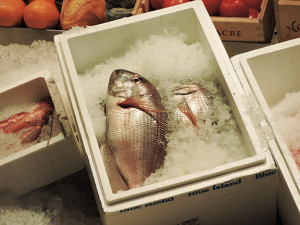 Milos is a Jeckyl & Hyde establishment. By night, Mr. Hyde is a pricey $$$$ fish house overlooking the twinkling lights of the Strip’s City Center. Their hook concerns how one orders: you walk up to a display of iced flown-in-fresh fish to interview the object of your evening’s meal – sort of like speed dating for dinner.

But, by day, Milos’ Dr. Jeckyl is an entirely different animal. Here comes the deal.

For the prix fixe of $25.15 (the punny 2015 price) you get a three-course choice of appetizers, entrées and desserts that will make your mouth water and your taste buds swoon. And, the Greek wine pairing at $16 costs less than the single glass at most other restaurants.

We ambled in for a late lunch as the pescadors (fish wranglers) were setting up the evening’s display of daily catch imported from exotic places like the Bay of Fundy and the shores of Morocco. While we scrutinized the menu, our tattooed, CIA-trained server brought us a bottle of still to quench the thirst we had built shopping the Crystal at Aria. Our only disappointment on ordering from the half-dozen dishes in each category was the wine list’s oversight of Retsina, an iconic pine-resin flavored Greek wine and Consort’s fave.

The apps appeared quickly, Grilled Octopus ($10 supplementary) for me and Hortopita for Consort. Loaded with charcoal-broiled flavor, I devoured the octopus. I don’t think Consort was able to stab more than one tender blackened morsel for himself. I promised to share next time. The Hortopita, a flaky stuffed pastry served with a small herb salad, started off Consort’s prix fixe with notes of tangy feta and fresh herbs.

For mains, I ordered Lavraki, a whole grilled sea bass butterflied and made piccata-style with olive oil, lemon and capers. Fresh from the Med, the boneless fish, flaky and flavorful became a favorite. A glass of Greek Agiorgikiko rosé paired with Consort’s Shetland Island Organic Salmon—a lunch-sized ingot of Scottish salmon also grilled with capers, herbs and lemon. Tasting both, I think mine was the winner, but his won a close second.

Though happy and satisfied with the meal, our server insisted we try dessert. His recommended Greek yogurt presented like rich and tangy vanilla ice cream covered with fresh berries. Again, simple, classic and the perfect capper for the meal.

Taking account of the price and the extent of the menu, Estiatorio Milos should be good for six straight Vegas lunches without fear of redundancy, boredom or disappointment. Kalí óreksi! (Bon appetit in Greek.)