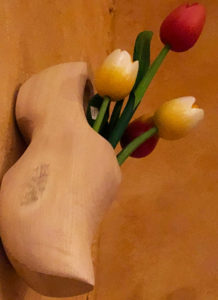 The outside of this conservative Indonesian-Dutch restaurant is easy to miss, with its black-metal lanterns that look like antique gaslights glowing across the front of the building. Once inside, an old-world style bar, stretched the length of the restaurant, lends itself to a warm atmosphere which includes a smiling bartender offering an array of drinks. Chocolate-colored tables and chairs are set with flickering tea lights. The restaurant seats 42 patrons at tables with an additional 15 seats at the bar.

I suppose the little wooden Dutch shoes with fake tulips hanging from the walls are a nod to Chef owner David de Quay’s heritage, while a hand-carved mirror that hung over our table reminded me of Pier One Imports. The décor didn’t transport me into the Netherlands, nor to Indonesia. De Quay felt more like a neighborhood hotspot (literally) than the advertised blend of Dutch and Indonesian food.

The menu is limited, offering seven small plates, six side dishes, and seven entrees. There were three of us, all well-versed in global fare. We began with drinks, a Belgian beer, a dry cider, and a club soda with three green olives. Drinks were perfect.

We shared appetizers: Javanese chicken sate (Indonesian spelling of ‘satay’) with peanut sauce and homemade slaw, black pepper gouda dumplings served with potato, peas and bacon in wonton wrappers with mustard sauce—nothing too exotic there. We favored the dumplings, but did not taste any peas or bacon in the filling, only cheese. The mustard sauce tasted incredible, but they might have forgotten the mustard. It tasted more like an aioli you might prepare for artichoke dipping.

The curried chicken was touted as marinated in buttermilk and aromatics for 24 hours, a process which didn’t disguise the ordinary nature of the breast. It tasted plain and salty, drowned in a sea of curry sauce sprinkled with toasted almonds on top of dried apricot seroendang. They may have run out of apricots because that tart and sweet flavor never crossed my palate. 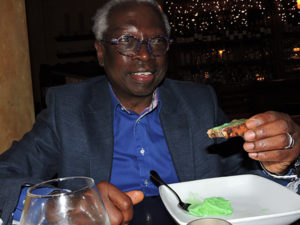 My friend, a distinguished professor of linguistics with solid experience in as many of the world’s cuisines as the languages he has studied, ordered the glazed pork chop, which he tried unsuccessfully to ‘saw’ with the sharpest knife the restaurant provided for their guests. The waiter offered to substitute his dish for another, but he declined. Ultimately the manager took that charge off the bill.

The nasi goring, de Quay’s version of the Indonesian classic, is fried rice elevated by a pair of sunny-side up eggs and flavorful pork belly. This spicy dish comes with a warning from the waiter as to its heat and potency. The bottom line is it’s not much more than a bowl of fried rice for twenty bucks. I should mention the side of krupuks, a popular fried Indonesian cracker, airy and light made from starch and other ingredients. Sadly, nothing to rave about.

But here’s something quite ‘istimewa,’ Spekkoek, a scrumptious dessert—thin layers of cake and almond paste served over a scoop of pandan (tropical green) ice cream. Surprisingly sweet and savory.

I recommend this restaurant for drinks, appetizers, dessert and before or after theater munchies. There are several theaters within walking distance. Take your appetite for entrees elsewhere.