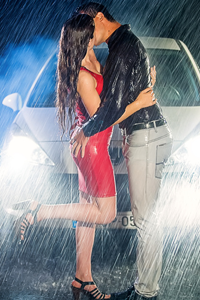 I’m a dinner slut. It doesn’t take much for me to say ‘yes’ to an invitation to dine at a unique restaurant. My only stipulations are the following: My date must be interesting to talk with, have a good sense of humor, be willing to try new restaurants, and have no expectations at the end of the evening.

My nickname, dinnerSlut, came about a year after my husband died. I found it difficult to come home after work to an empty house, so I began booking dates for dinner. I’d visit new establishments at least four days a week, trying to keep up with the trendy restaurants in the area. My identity became public on Match.com, which is where most of my dates were arranged. A few of them were friends who wanted to placate me by satisfying my uncanny desire to dine with men, most of them strangers, all of them looking for a relationship.

It seemed safe enough. I’d set up a date at the restaurant of my choice. We’d meet at the front entrance, which seemed awkward at first. Finding someone on a ‘blind date’ is a bit of a challenge. I’d ask for a description of his attire, anything that might help me spot him without embarrassing myself by saying “hi” to an absolute stranger. I seldom mentioned what I’d be wearing for fear of having to make an emergency exit without being noticed.

“Do you ever pay for your meals?”
“Not with money.”
Penny – The Big Bang Theory

I’d leave after the bill was paid; saying goodbye in the parking lot, with a hug and sometimes planning a second date before driving home. We might exchange contact numbers at the end of the evening. It felt safe meeting them at an restaurant. I never gave information about where I lived and I always made sure I wasn’t being followed home.

I had become somewhat of a restaurateur during the fifteen years my husband and I were married. He owned and operated a restaurant in downtown Phoenix, Tom’s Tavern, which was historic and successful. Before our involvement, I didn’t know much about the inner workings of the restaurant business. By the time he was diagnosed with cancer in 2008, I felt as if I knew what defined a successful restaurant and what factors determined whether or not they made the cut.

I began spending more time at Tom’s, talking with patrons, checking on orders as they came out of the kitchen, watching over the bartender as he poured his drinks and even inspecting the restrooms making sure they were kept clean and presentable. I learned more of the business after his death as I settled debts with distributors, kept the payroll going, tracked inventory, and participated in negotiations with the Bidwells (Cardinal owners) for the sale of the eatery after my husband died.

But what exactly was I looking for as a dinner slut? Not a partner, as it seemed impossible that I could ever find a replacement for my late husband. Perhaps it was companionship, someone to talk to during a meal, someone to discuss foods, wines, and a restaurant’s sex appeal.

It seems in retrospect that my serial restaurant visits were an attempt to replace the empty space at my dining table, the stillness of my house when I fixed a meal for one. I recall an overwelming sense of grief during meals at home, where I opted to stand rather than sit and gaze out my kitchen window listening to the familiar sounds of birds that sing day and night, the hum of the fans, wanting but finding it difficult to forget how it used to be.

My frequent dates to cafés, eateries, and bistros, during the last few years coupled with my restaurant and writing talents have given me insight into the latest dining trends and blunders. I’ve taken dining out to a new level – I’m now a professional foodie reviewer. It’s not only about the food; it’s about the overall experience. It’s about the adventures of a dinner slut.