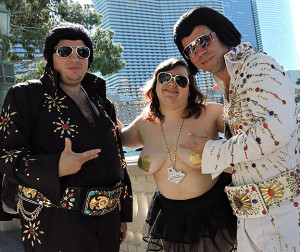 Working up an appetite in Vegas isn’t difficult. Every destination is a hike and a freak show. Trekking over bridges, through smoky casinos, dodging flippers and panhandlers as we weave our way through topless performers, Elvi, street people, buskers, and an imitation Pee-wee Herman on his X-1.

From the Bellagio lobby to Hash House A Go Go: Round the lake, through shops, over a bridge to Caesar’s, another bridge walkway (over Las Vegas Blvd) by Ballys, through Flamingo, crossing a driveway into the Link Resort Casino where Hash House A Go Go is located. Along the way expect moving and dead escalators which are perfectly suited for photographers. 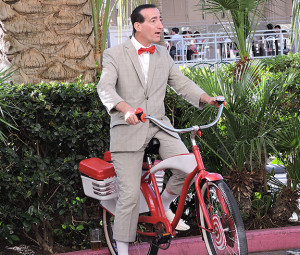 Consort here. You might ask why I’ve interrupted Dinner Slut (DS) in her review of Hash House. It’s because I am a huge fan of this restaurant—its twisted farm food cuisine and the renown as-seen-on-TV specialties. And, (DS), a petite night person, not an admirer of giant breakfast portions, came along to moderate my calorie intake.

I’m a Hash House fanboy since it opened. A quick history links it to Imperial Palace, a dump, the Quad for such a few heartbeats that I missed that iteration entirely, to the renovated, all modern and upscale, and renamed Linq—the restaurant with its hip Indiana farm ambiance finally has a home that stands as an equal.

At the back of the casino, up an escalator—an overflowing crowd waits to be seated. This is Hash House—packed for breakfast and brunch. (dinner is typically a shorter wait). No rookie, I weaseled our way through the throng (huge both in quantity and individual size), lorded my VIP status at the desk and we were escorted to a table without delay. It’s good to be Consort.

We started our noon-time breakfast with Fiji water to dilute the effects of Friday evening, then DS ordered herbal tea and I called for the famous 20 oz HH BLT Bloody Mary (hold the T – tomato allergy). The Mary is served with the usual accoutrements plus two slices of crisp bacon and a side of toast. A meal in itself if you’re inclined to dine on huge bar drinks. 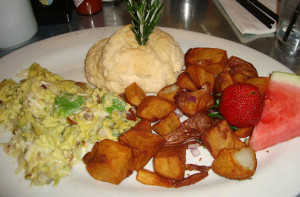 DS ordered the regular-sized Farm Scramble with smoked bacon, avocado, onion, and swiss mix-ins. Plated with crispy potatoes, fresh fruit garnish and Hash House’s huge buttermilk biscuit. She was pleased with all of the breakfast goodness placed in front of her. Then my order came and her jaw dropped. 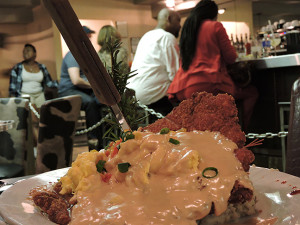 Having sampled most of the menu on previous visits, including the mountainous Chicken and Bacon Waffle Tower and the Man V Food favorite Fried Chicken Benedict, I had selected the huge Crispy Hand Hammered Pork Tenderloin Benedict. About as akin to the usual eggs Benedict as a minnow is to a whale—gargantuan. Start at the bottom of the platter with a mound of griddled mash, then add one of the giant HH biscuits split in two and pile on a scoop of spinach. Normally a tomato slice goes here but not so much for me – see allergy reference above. Now take a pound or so of pork tenderloin and pound it flat until it resembles the sole on Bigfoot’s sandal, bread it and fry it until it’s crispy, tender and down-on-the-farm tasty and lay it on top. Add three scrambled eggs, a slathering of ‘bar b’ que’ cream and a few other odds and ends, like strands of deep fried spaghetti.

“You’re never going to eat all that!” DS teased (of course, she was right). Looking around, we saw monstrous platters delivered to tables, booths, and bar. First they were photographed, then pointed to in disbelief, and eagerly devoured. Some diners left with grocery-sized doggie bags, but, in most cases, plates were cleared with much less in the way of leftovers than one might imagine. Hash House serves a food gasm that rocked you.

Next time I’m in Vegas, I know I’ll head back to H H. I’ll order the Chicken Pot Pie that our server said had to be brought to the table by itself because he couldn’t lift anything else at the same time. It will be worth the wait.