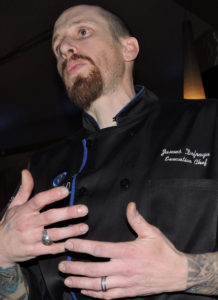 “Seasonal. Sustainable. Fresh.” We’ve all heard this promise before – especially when it comes to most tragically-hip upscale restaurants. In the case of AquaKnox, the seafood option at the Venetian in Vegas, there is a clear difference – Chef James DeFraga.

While drinking in the ocean theme with soft blues and coral tones, diaphanous booth draping and high ceilings, Chef DeFraga joined us for a face-to-face. Speaking with conviction and energy, Chef exposed his dedication, edgy vision, pride in product and presentation with keen attention to minute details.

But of course, this isn’t the whole story. Chef DeFraga began his journey into the restaurant business early in life – at age sixteen. His career path followed a steady upward trend starting out as a hired ranch hand on an organic farm, to becoming a line-cook graduating to prep cook, then a sous chef before his current gig as a top-notch executive chef. He isn’t thought of as one of the ‘rock star’ chefs typical of many Las Vegas eateries – no TV show or partnerships in a long string of 5-star bistros, but to his advantage, he’s a great chef and a genuine “good guy.” OMG, he’s actually in the restaurant and talks with his patrons. You can’t say that for Las Vegas’ invisible celebrity chefs such as Tom Colicchio, Wolfgang Puck or Jean-Georges Vongerichten. 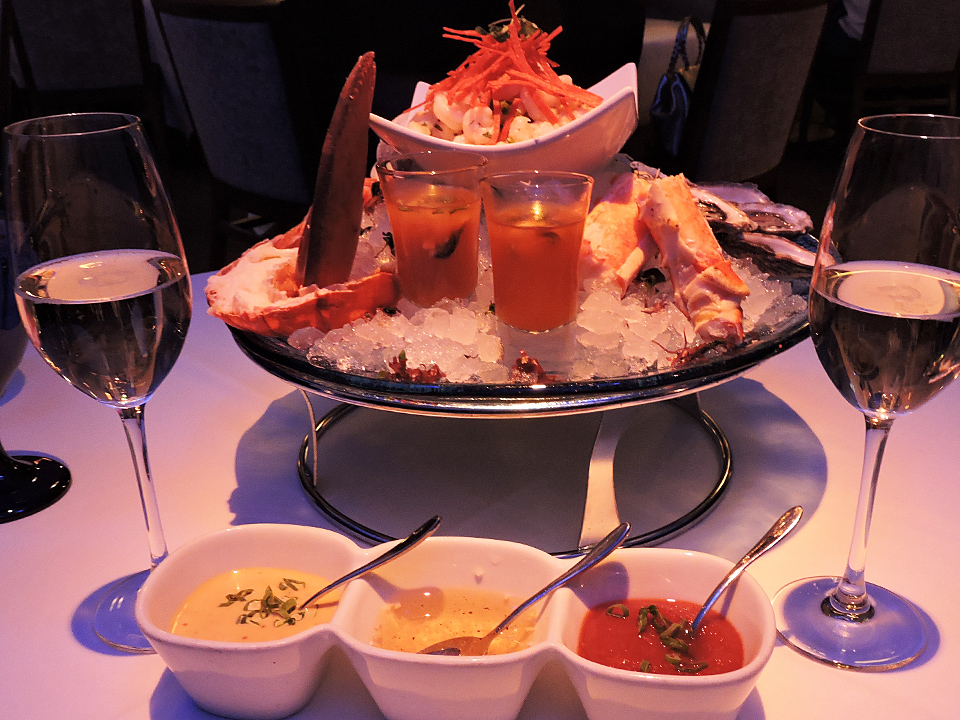 After placing our order with the captain, the sommelier, Louis Hamilton, started us off with some bubbly, Tavistock Reserve Prosecco (the house brand), quickly followed by the presentation of AquaKnox’s ‘Seafood Plateau’—a revolving mountain of fresh seafood delights. This iced platter of delectables featured steamed lobster, prawns, three varieties of oysters, clams, mussels, king crab leg, pink shrimp ceviche and a pair of ponzu oyster shooters with sides of mustard, mignonette and cocktail dipping sauces – wow!

While waiting for our mains, we were served our selected wine – the Whispering Angel Rosé from Provence. My readers know that I’ve been lauding the virtues of rosé for years and AquaKnox seems to share my zest for the good pink. 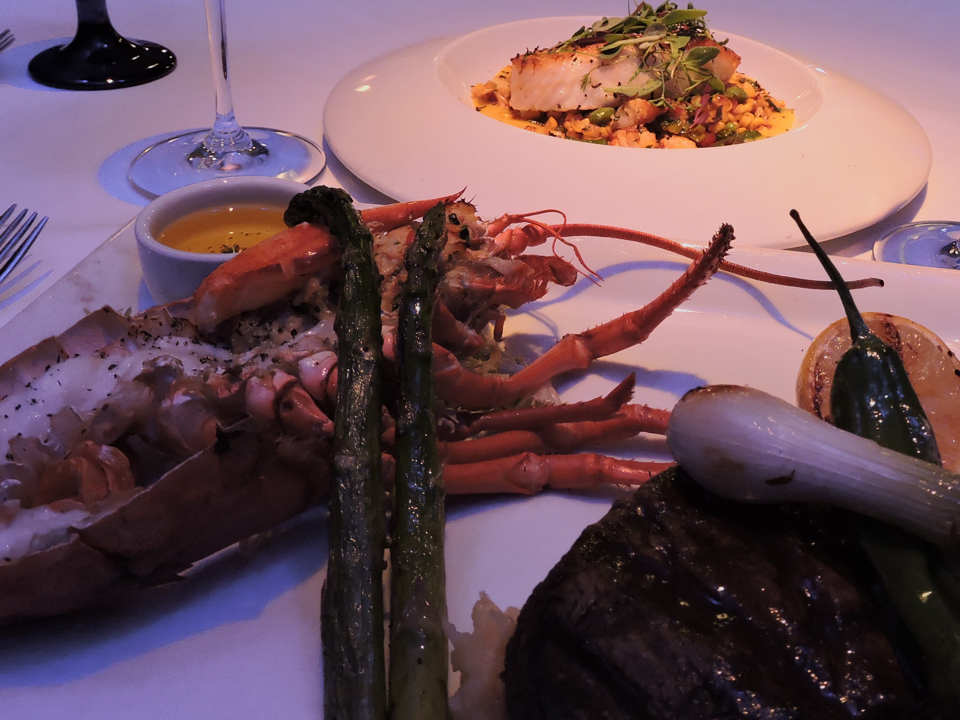 I selected the Chilean Sea Bass with lobster succotash, black truffle, and sea greens. Of the three occasions I sampled sea bass during my Vegas junket, this was, by far, the best. The fish was flaky, moist and extra flavorful, and the garnishments were equally tasty. Consort went for the daily special ‘Surf and Turf’ including a crab-stuffed half Maine lobster and a masterfully grilled petite filet. It must have been exceptional because when I turned my head to ask for a taste, it was almost gone.

We ordered the Butterscotch Bread Pudding to assuage Consort’s sweet tooth and again we were surprised –this time by a visit from a ten-year old Australian aged wine – Yalumba Antique Tawny Port – which paired perfectly with the sweet gooeyness of the desert.

Sitting back and contemplating the end of a perfect meal (Consort let out his belt a notch), while I took a closer look at AquaKnox’s cylindrical ocean-blue wine tower—the dominating presence located center stage. I flashed on Back to the Future’s senior prom dance theme ‘Enchantment Under the Sea’ as a perfect description of this romantic evening.